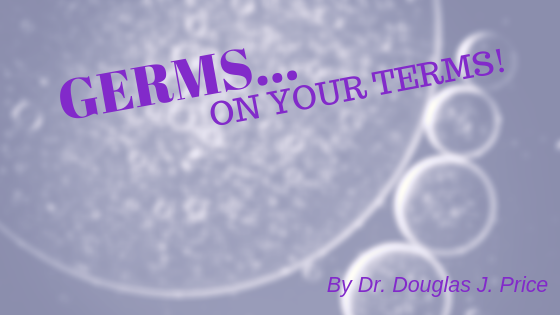 Heal With Germs On Your Terms
By Douglas J. Price, D.C.
Mother Nature never makes mistakes. God made everything for a purpose, including germs and bacteria.
Dr. Hamer MD, the founder of German New Medicine, discovered that we evolve through microbes (fungus, bacteria, etc.). After his medical research at University of Munich, Germany, he found that the building up and breaking down of bacteria is designed by Mother Nature as a repair mechanism.
Dr. Hamer’s findings correlated with CT Scans and lab work. For instance, in the case of glandular breast cancer, a growth occurs in the first phase, or the stress phase. And when the underlying mental conflict is resolved on your terms – in other words, relieved from your psyche – you no longer have to be in survival mode. In the case of breast cancer, the breaking down of fungal bacteria breaks down the growth of the mass provided you have not been eradicated by vaccines and multitudes of antibiotics. What we are talking about here is indigenous microbes within your body, not the non-indigenous microbes from third world countries.
You may also find it surprising that once we have an unanticipated dramatic event, the intensity of the bacteria will grow according to the intensity of the conflict mediated by your brain and remain in a non-infectious state. It only becomes infectious on your terms, when you resolve the conflict. This results in the immune system stepping back in the second phase, or the healing phase, to allow the microbes to do the repair phase of breaking down or building up. This can be seen when people get sick just before they go on vacation.

Clearing Tracks To Evolve The Soul

Life experiences – good or bad – occur because of the tracks that control your thinking and doing.
Hearing the word “tracks” may give you a picture of railroad tracks. But in the context of German New Medicine, “tracks” has a completely new and powerful meaning.
To understand this life-changing concept more clearly, I will first explain the difference between “traits” and “tracks.” A “trait” is a psychological term; it refers to a certain type of behavior or characteristic a person exhibits. In contrast, a “track” is a subconscious reminder of what you have seen, heard, felt, smelled and tasted in relation to an unexpected trauma from your past that is stored in your psyche.
An individual can radiate both light and dark qualities that are perceived in outward behavior. But unanticipated dramatic shocks have an effect on the level of the soul, and the lessons to be learned are not immediately obvious. The founder of this work, Dr. Hamer, wrote his first book in the 1980s. In Cancer: Diseases of the Soul, he explains that all diseases stem from an unexpected shock that catches us off guard, causing health issues and the inability to manifest what we want.
For instance, parents want to make good decisions. And yet, what occurs in our environment influences our thinking through our psyche as “tracks.” This is why it is necessary for parents to clear tracks from any original conflicts – so that the soul of the parent can learn its lessons and clear the pathway to see the light of the truth in any situation. This can serve them greatly in raising their children.
To further understand the concept of tracks, here is an example of a previous client of mine that was a parent wanting to be nice to his or her child because their own parents mistreated them.  This parent had put a lot of thought into treating their child very well, but it is well known that spoiling a child can be just as bad as mistreating them.
So my client’s young adult son was selling drugs at home.  My client was attached to their “trait” of being nice and was heavily influenced by memories of being mistreated in their own childhood. In consequence, my client couldn’t properly guide and discipline his son for breaking the law as well as their house rules.
When I asked my client what happened when he went through this and didn’t discipline his son, he said he would become depressed with suicidal thoughts.  He also felt disoriented. I explained to him that it was his past trauma with his own abusive parents and unstable childhood. My client had a deep programming of incomplete love and inability to finish projects. He also believed at that time that if he stood up for something, like his own house rules with his son, it would result in abrupt separation and pain like what had happened in his own childhood when he tried to stand up to his parents.
Through the sessions with me, he finally realized the common thread through his life. We were able to pinpoint the origin of his depression and constant desire to urinate during the day. With the help of German New Medicine, I was able to explain that the bladder has to do with boundaries.  I explained that at times in his life when he had to urinate even more than usual, those were the times that he could not make a stand or say no. After our sessions, my client was able to develop his ability to discipline his son and stand up for himself and his values, which still honoring his “trait” of being nice. He was finally able to understand why it was so important to him because of past trauma, and in consequence, he was able to moderate his behavior.
German New Medicine, officially developed in 1981, has a concept of an “unanticipated dramatic shock” called Dirk Hamer Syndrome (DHS). Depending on the nature of the shock, archaic programming will automatically take over. It does the thinking for you. Once triggered, regardless of what we value as a “trait”, the “track” created by the shock will blindly lead us, trying to avoid pain and ferociously seeking pleasure.
However, as in the case my aforementioned client, we used the talk therapy of German New Medicine to help him understand what his original conflict was, thus rewriting his “tracks,” reversing his symptoms and healing his body and mind.
The parent is now able to discipline his child while still staying true to his trait of being a kind parent. More importantly, he doesn’t suffer from depression or constant desire to urinate. He has more confidence in himself and peace in his life.

Pain is a tool that is meant to protect us from further injury when we come across current situations that remind us of previous experiences.
Some of you may see this and say “What? I thought you get pain from only one injury.” Actually, the answer is both yes and no.  The yes part is a no-brainer and it can be the only reason. The no part has to do with the circumstance as we experience it on the psyche level that reminds us of what we have felt, heard, seen, touched, smelled and tasted from an unanticipated event from similar past circumstances. It can be one or more of these senses that can be activated depending how we perceive it both unconsciously and consciously.  It is embedded since the dawn of creation and is necessary for our optimal survival.
At times we may not like the outcome of our bodily reaction even when it doesn’t make sense. That is only on the mind level, believing that it has to make sense.  Unconsciously, the psyche unlike the mind just senses, period.  Putting it into “mindful terms,” it is ‘better safe than sorry’ mode. A more descriptive example is that in an unanticipated traumatic event, our spleen can have a drop in platelets because it had blood transfusion because it can’t tell the difference whether it is blood-letting or receiving blood.  However, our mind can tell the difference but it is not the cause of disease. In case if you are wondering, negative thinking can lower our vitality and create bad habits, but it is not the cause of disease.
There was a case that fit the above description.  He was snowboarding and injured himself in the right shoulder and pulled his left lower abdomen in attempt to guard himself from further injury. He has snowboarded before many times but this time it was a mixture of things similar and new.
Lets start on the mind level where expectations are placed on the memory of the injury to the shoulder. It is logical that if you bump your shoulder hard enough and in a wrong way, pain and bruising of the shoulder area is logical to expect.
Here comes the unexpected or having no expectations that are below the surface of our awareness of mind level. The psyche picked up in split-second relating millions of bits of information that is pertinent to survival. Any previous memories stored in the subconscious of related physical or mental or emotional association to the latest event re-triggers the protective response.  In the acute phase, bruising of shoulder could result in increase in platelets count local to the injury relative to the severity to the injury. Bones in the joint decalcify at the time of impact and may indicate fracture or avulsion of connective tissue, etc.  All the while, the psyche may process another layer of tracks necessary for the next time it may happen.
As I explained this phenomenon to him, he was beginning as he slips under his skin, the soul of the psyche, make associations to past events and saw clearly the past events that added more pain to his shoulder injury.
Prior to the snowboarding accident, his friend who was inconsiderate of his place of residence had sex with a woman he briefly met through an on-line dating site.  It was unforthcoming and he felt dismissed and something was not right about this.  He learned that this weakened his shoulder joint.  All it took was a set-up of an accident to reveal more of a picture what was really going on under his skin.  He even admits he had these kinds of physical encounters all the time with all parts of his body when he snowboards.  He was marveled by the fact that by slipping under his skin, I sensed, for example, the top part of his shoulder and knew his intentions to make this place a better place. With the people he knew that didn’t consider his place or if they were even aware how he was abruptly cut off from his place which gave him the feeling of something is not right or being dismissed which affected his upper back, further hindering his recovery from the snowboard accident. He admitted how frustrated he felt after spending so much time in helping them spiritually and mentally in a project he was involved in.
He said, “God!  Why is this happening?  Is this what my mortality on this earth is about? I don’t know if I can shoulder the burden when people don’t show or have consideration of my needs?”  I pointed out “shoulder the burden” indeed. I guided him in making other associations of similar circumstances one by one; he felt releasing the pain of his shoulder and mobility improved greatly as he related to the tracks that were similar in the past.
I explain as I processed his conflicts in feeling sharply separated that related to covering of the bone, devalued by them being inconsiderate on bone mass itself and the kidney connection that related to isolation from his friends.  He saw that there is more that meets the eye in a simple snowboarding accident.
I did add a psychological component to this biological conflict that further strengthened his resolve. I reminded him, you can choose to empower yourself or give power away to the irresponsible or immature behavior of others.

What To Expect From A German New Medicine Practitioner